The first time I had the honor of interviewing and writing about a Holocaust survivor for The Gazette, I got an angry phone call after the story ran. A reader was mad about the coverage. 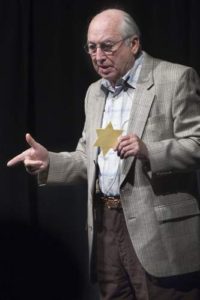 Cesare Frustaci, a Holocaust survivor, talks April 10, 2014, at Xavier High School in Cedar Rapids about his personal story of growing up in Hungary under the German occupation. His mother sent him away from home to the streets when Jews were forced into a ghetto. The two eventually reunited after the war. (The Gazette)

The story was about Cesare Frustaci, who was just 7 when his mother put him out on the streets of Budapest to fend for himself with only a pillow, a little bit of bread and a Catholic baptism certificate in his pocket. She told him to deny he was Jewish to anyone who asked. It was her way of protecting him, of hoping he would survive.

“Mother saw Jewish children being rounded up and taken to the Danube River and thrown into the river to drown,” he said.

Frustaci told his story in Cedar Rapids in 2014 during at the annual Yom Hashoah Holocaust Remembrance Day service. Each year, a Cedar Rapids-based nonprofit, the Thaler Holocaust Remembrance Fund, brings a speaker to share his or her story at the service. The stories are always moving, a reminder of both the worst and best of humanity, of the horrific atrocities people are capable of inflicting on each other and of the bravery and strength of spirit of those who survived and those who helped them do so.

The man who called me after The Gazette published Frustaci’s story didn’t see any of that. He berated the newspaper for spending space on a story of someone he said was not American.

Frustaci, in fact, had spoken proudly about becoming an American and had raised his family here. The caller didn’t seem to care for that detail. It shouldn’t have been important, in any case; one’s humanity is not defined by citizenship or country of origin. I was shocked and disturbed by that call, by such a callous attitude toward the suffering of others, by such a blatant refusal of empathy.

But I know the survivors I have interviewed over the last five years likely wouldn’t be shocked to hear about that call. They’ve been hearing opinions like that all their lives. Many spent decades trying to put the horrors they survived behind them, only to see people repeat the hateful rhetoric that led to genocide, and in some cases to hear people deny their experiences and losses were even real.

Frustaci said he did not speak about what he went through until 2004, when he heard about a Catholic priest in England denying the Holocaust had ever happened.

“This made my blood boil, because I was an eyewitness,” he said. “At that point I said, ‘It is my mission for the rest of my life to educate the younger generations.’”

Anti-Semitism and the ugly forces of hatred and bigotry that fueled the Holocaust did not die with the ashes of World War II. Frustaci and other survivors and members of the Jewish community knew this, and the rest of America was reminded of it all too clearly last weekend, when a shooter murdered 11 people inside the Tree of Life Synagogue in Pittsburgh.

The oldest victim, Rose Mallinger, was 97; the youngest, David Rosenthal, was 54. When I saw the ages of the oldest victims, I immediately thought of the survivors I have interviewed, in their 70s and 80s and 90s. I especially thought of Jacob Eisenbach, who was about to turn 94when he spoke in Cedar Rapids last April.

“As an eyewitness to the Holocaust, it is my moral obligation to rekindle the memory of one of the darkest periods in history … If we should ever forget the Holocaust, we would be contributing to its repetition,” he said.

He retired from a career in dentistry and now travels the country, speaking out against hate. Writing this, I checked, and he still is going strong.

“I’m planning to be around for much longer,” he told me last year. “With my mission to prevent genocide and to do what I can to counteract anti-Semitism, which all good people of the world realize is a crime against humanity.”

The need to tell the stories of the survivors continues. The work is not done.

And now, wrenchingly, we have new stories to tell, new names to remember: the victims of the Tree of Life.

May their memory be a blessing.

Reposted from The Cedar Rapids Gazette
click here for the article