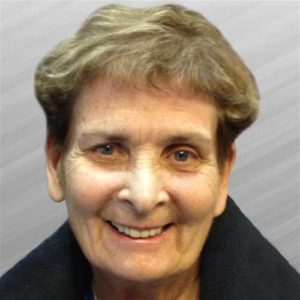 Harriet A. Gasway, 86, passed away July 23, 2020, in her home in Cedar Rapids, IA. Several years of challenges from increasing dementia, and physical challenges from injuries suffered in recent years took a toll on her well-being. Private family services will be held Tuesday July 28th.

Harriet was born February 14, 1934, to Samuel and Bertha Labovitch, in Saint Paul, MN. She graduated from St. Paul Central High School, and later received an Associate of Arts degree at the University of Minnesota. While she was in Minnesota, she met her future husband, William “Bill” Gasway, when she offered to substitute for a friend who had double booked two dates at the same time. Needless to say, he never dated the friend and on June 10, 1956, she was married to Bill.

After getting married, they moved to Rockford, IL, while her husband was stationed there as an engineer in the Air Force. A short time later, they relocated to Cedar Rapids. After having her two sons, Harriet began working in the family paper business (J.P. Gasway Co), first in accounting, and later she had a lengthy and successful career in sales. She would fight to get the best products and service for her customers, generating intense loyalty and strong relationships along the way.

She enjoyed many little things in life such as her daily long walks, which were typically five miles in the morning, until a broken leg and other injuries prevented these walks. She loved her little triangular shaped garden in her back yard, with tomatoes, flowers, chives and more. It got trampled more than once, as it was directly behind home plate. She never complained about that. Other interests included golf, cooking, and travel. She especially loved any activity involving her grandchildren.

When she first was married, she did not know how to boil water or make coffee, but within years she was an excellent cook and baker. As anyone who had them can attest, her chocolate-dipped finger cookies were her specialty, although many say the strudel she made was close second. She loved throwing a social event and was always the organizer.

She was active in the community at PTA, Den Mother of Cub Scouts, President twice of Temple Judah, and more.

Preceding her in death include her parents, her siblings Miles Lane and Shirley Labovitch, her parents-in-law Jack and Miriam Gasway, and grandson-in-law Andrew Nelson.

Harriet will always be remembered as a loving and wonderful wife, daughter, mother, grandmother, aunt, cousin, and dear friend. Her memory will be a blessing.

In lieu of flowers, should a memorial be desired, it can be made to Mercy Hospice (701-10th Street SE Cedar Rapids, IA 52403 or mercycare.org/giving/hospice), or to the charity of the donor’s choice.