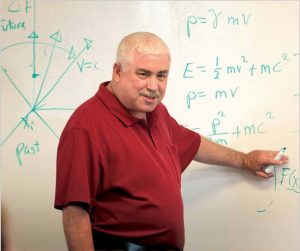 The conference was held in honor of Feller in recognition of his unique contribution to the study of borate materials and his lifetime of achievement in the study of glass. It was fitting recognition for Feller, as the professor and researcher who co-founded the conference series more than 20 years ago.

The conference opened with a tribute to Feller by his former student and longtime colleague, Fran Allison and Francis Halpin Professor of Physics Mario A atigato ’89. In describing Feller’s academic and personal experiences, A atigato emphasized how his mentor had developed a world-class undergraduate scientific research program from scratch. Feller then took the stage, giving an overview of his 44 years of glass research. In total, seven alumni helped to honor Feller by attending the conference, along with eight current Coe students, his wife Barbara, his daughters, Heidi and Rachel and their families.

Feller participated in what is now considered the first borate conference in 1977 when he was completing his Ph.D. in physics at Brown University.

The meeting was hosted by the New York State School of Ceramics at Alfred University in Alfred, New York. The idea to create a series was discussed at that time, but never materialized. Upon earning his doctorate, Feller joined the Coe physics faculty in 1979.

In 1992, Feller presented on new glass discoveries made at Coe during a meeting of the American Ceramics Society in Washington, D.C. While there he met Adrian Wright, professor of amorphous solid-state physics at the University of Reading in the United Kingdom, and a world expert on neutron scattering. The researchers quickly developed research collaborations and a lifelong friendship.

Feller received a Fulbright award to conduct neutron scattering research on glasses at the University of Reading in 1996. During a lunch conversation, Feller and Wright decided to reinitiate a borate conference series, patterned after the 1977 meeting. Funding was provided by The Royal Society, the University of Reading and other interested glass groups, with the first meeting held in the United Kingdom that same year. A atigato, who was concluding his first year as a Coe faculty member at the time, as well as 15 Coe students, participated in the conference.

Coe physics students have actively participated in the seven borate conferences held ever since. Coe College hosted the fourth International Borate Conference in 2002. Other host sites have included Bulgaria, Italy, Japan, Canada and the Czech Republic.

Early on, Wright and Feller decided to honor an outstanding glass researcher at each conference, which takes place every third year. In fact, Feller’s mentor and advisor at Brown, Professor Phil Bray, was recognized for his work at the second Borate Conference. Last year, Feller received word from the organizing committee he was selected as the 2017 honoree of the group.

“It felt good to give a talk on my life’s work, and it was special when Mario presented my biography to the group,” said Feller. “It was a wonderful honor for me personally, but it is also good for Coe to get this kind of recognition from peers in the scientific community. We are viewed in a very favorable light within our niche.”

“We are certainly one of the most active physics departments in any liberal arts college in the country,” said Feller. “We have achieved something quite exceptional at Coe. More than 30 students spent the summer on our campus conducting physics research.”

During the meeting, A atigato noted the deep friendship he and Feller have developed over the years, and expressed profound gratitude to his colleague and mentor.

“The Borate Conference provided a fitting tribute of Steve’s four decades of professional success and leadership,” said A atigato. “From scientific work on structure and properties to the development of future scientists and the initiation of the Borate Conference, his work will stand the test of time by his positive and multifaceted contributions to the fields of physics and glass science. No better recognition can be found for a scientist.”

To ensure continued success, Feller and his colleagues are making plans to preserve the college’s Center for the Study of Glass, and enhance the program. Coe has committed a tenure-track physics faculty member and glass scientist to ensure the continuity of Feller’s work as he enters phased retirement. For 2017-18, Feller will be teaching two courses and increasing his focus on research with students. For the following two years, he will be spending his time exclusively on student research opportunities.

“We have to be proactive to maintain a program like this,” said Feller. “It just doesn’t happen without planning for the future. The inner drive of our faculty to help all of our students succeed is very important.”

Feller says that collaborations have been crucial to the success of the Coe glass research program. From the beginning, he has always sought to work with scientists with mutual interests, many of whom were at the borate conference. The result has been joint research opportunities for the physics faculty and students in England, Brazil, France, Canada, Greece, Japan, Italy and China, as well as leading university and industrial research laboratories in the U.S.

SECOND MAJOR AWARD IN A YEAR

The latest honor represented Feller’s second major award in a year. Last summer, he was the first recipient of an exceptional and prestigious award granted by the original worldwide glass research organization in its 100-year history. Feller was named as a Centenary Fellow of the Society of Glass Technology (SGT). Created in 2016, the Centenary Fellow of the Society award celebrates the 100th anniversary of the founding of SGT.

The award was presented at the centenary meeting of the SGT held at She eld Cathedral in She eld, England, with hundreds of scientists from around the world in attendance. The SGT, the first society dedicated to the study of glass, was established in 1916 at She eld University.

As part of the organization’s celebration of its centenary, the society presented three awards. Each awardee was named a lifetime honorary fellow in the society, called a Centenary Fellow. The recognition was granted in the areas of science, industry and service to the society. Feller was chosen as the scientist to receive the inaugural award.

According to the SGT, Feller was recognized, “For his exceptional contribution to glass technology and the society by way of publication of a large body of world-class scientific work, enthusiastic support of the SGT American section, his excellence as a teacher and the establishment of a new Glass Research Center at Coe College.”

A CAREER OF RESEARCH AND TEACHING ACCOMPLISHMENTS AT COE

Feller has been studying glass since he was a graduate student at Brown University in Providence, Rhode Island. In his graduate research he used nuclear magnetic resonance techniques to study glass. Feller brought his knowledge and experience to Coe when he began teaching physics in 1979.

Starting with a handful of students each summer in the early years, Feller decided to focus on researching the properties of glasses and making new glasses.

“In the early days, we had three or four students doing research each summer. We began to write papers together, we began to give talks together, and it just kept growing,” said Feller. “It was a good fit; we developed a niche of excellence.”

Today, Feller and his physics colleagues work with several dozen students each summer, studying the properties and atomic structures of glasses among many topics. This research work has resulted in the discoveries of new types of glass at Coe.

When A atigato returned to the college as a physics faculty member in 1995, Feller says the “gestalt” was apparent and the program began to quickly build on itself.

To garner the funding for the glass research, Feller started to research grant opportunities early in his Coe career. His first significant grant came from the Research Corporation, followed by initial funding from the National Science Foundation (NSF) in 1986. Since then, the NSF has continually funded research in the Coe Physics Department, with more than $8 million in grants overall. Along the way, Coe also became one of a few small colleges in the country designated as a Research Experience for Undergraduates (REU) site by the NSF, which further expanded the opportunities for students.

“From 1986 through the present, we’ve been fortunate to receive continuous funding from the NSF,” said Feller. “The primary grants have come from the NSF, but we’ve received support from other foundations and sources as well. Mario has also received lots of grants for research and equipment.”

In addition, Coe College has been supportive of the physics research in many ways, such as providing free summer housing for research students. This serves as an incentive to help Feller and his colleagues to attract the best students to conduct research each summer. All totaled, what began as a modest e ort has turned into a $250,000 operation each summer.

“We want the best students to join us each summer,” said Feller. “Over the years, we’ve been able to provide our students with life-changing opportunities and experiences.”

The Coe physics contingent gathers for lunch in Oxford.